If the athlete is competing on grass, they can get away with doing the triple jump in their bare feet. If they compete in the triple jump on a surface that has a lot of friction such as dirt or a competition track (tartan or mondo), then the athlete should wear some type of protective footwear.

The athlete can opt for an all-purpose athletic spike. However, the best option is a set of triple jump spikes that will provide extra support in the heel, which will also help support the ankle and stability as the athlete progresses through the different triple jump phases.

The top triple jumpers in the world that compete at the highest level (Olympics, World Championships, Diamond League, and Commonwealth Games) all compete in triple jump spikes.

Get a free "Triple jump cheat sheet" to beat your personal best in the triple jump!

Sign up to learn more about the exercises, drills, and techniques that will help you win in the triple jump!

Success! Now check your email to confirm your subscription. 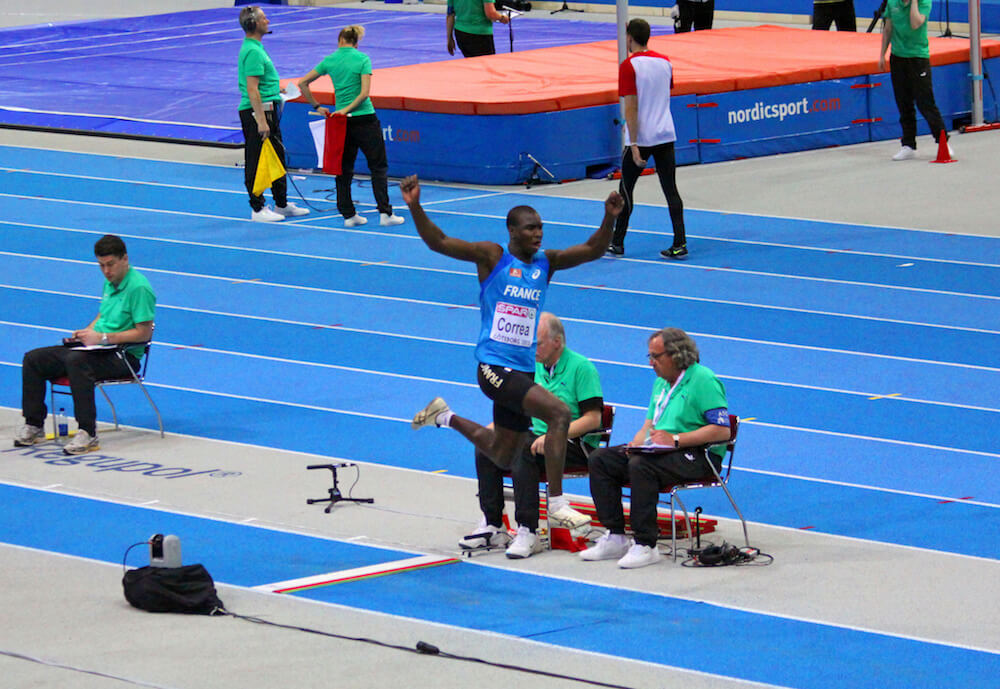 If you want to maximise the distance that you jump in the triple jump, you must first learn how to project your velocity through the jump. The only way you can accomplish this is by running through the board and maintaining the velocity/speed throughout each phase of the triple jump.…

Improving my hop was probably the best thing that improved my triple jumping distance when I was in my teens. In the beginning, the local coaches taught us that we had to “hop, skip and jump”. Hopping usually meant doing a hop with a straight leg. The thought of having…

The runup is the most important part of your triple jump approach. By the time you hit the board, your body must have accelerated to a point where you can control the velocity through each phase of the triple jump. There are a few things that you must achieve in…

How would you like to add more distance to your triple jump distance? One of the things that most people do is they don’t hold their step phase for very long. One of the common things is that people aim to skip in their step phase, instead of holding the…

Something that triple jumpers suffer from when they start jumping greater distances is bruising on the bottom of their feet. It’s unpleasant for the athlete’s performance and aesthetically. The trouble with the bruising is that it is internal and can take a while for the body to repair. When the…